No, this is not about 45’s tweetstorms. There is a world of political social media commentary that exists outside of his tiny-sized hands.

Social media has gained an increased presence in almost every facet of our lives. It touches every industry, not the least of which, is the world of politics. Platforms like Twitter provide an opportunity for once sheltered office-seekers to now connect with millions of campaign followers with the push of the button. This ease of connecting can increase access to the candidate, but can also lead to moments that take the internet by storm. Below are a few of these moments:

During the campaign, 45 posted a criticism of President Obama’s endorsement of Secretary Clinton. With her response, Clinton sent out the one of the most popular political tweets of all time. While the Clinton camp wasn’t the originator of this phrase, they certainly made it theirs in 2016.

In 2015, the battle in South Carolina waged over an aged symbol of racism. In a debate where lines were drawn largely on along political lines former Republican Presidential nominee, Mitt Romney broke ranks with this tweet. The confederate flag was later removed from the capital ground. 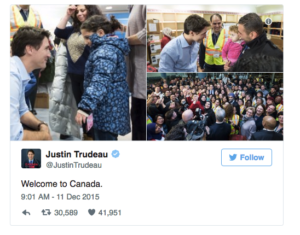 The political use of social media is far from just an American phenomenon. As the Syrian war raged and American politicians fiercely debated the appropriate solution, newly-elected Canadian Prime Minister Justin Trudeau took to Twitter. At the end of 2015, Trudeau announced the country’s position on accepting thousands of refugees, and largely cemented his vision for Canada’s future.

Whether you’re running for President of the United States, city council, or taking a stand on an issue you care deeply about, it’s important to acknowledge social media’s impact in politics. When used wisely, you’ll reach thousands.